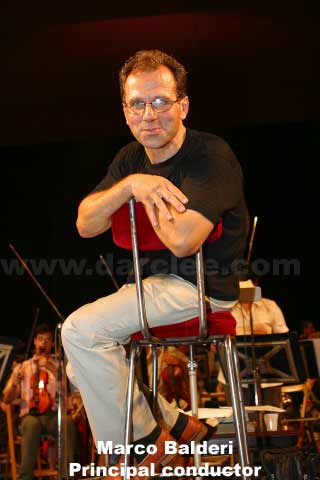 Since 1997 the Hariclea Darclée International Voice Competition is held annually in Braila. Every second year there is the major contest and festival, whereas the other year features a conference and a masterclass. The contest is quite a happening. Hundreds of young singers are hosted in the hotel Trajan, opposite the theatre and close to the banks of the Danube. The stairs, the elevators, the bathrooms ­ in fact you can hear singing, scaling and gorgling everywhere. All fine young people who come with a dream, hoping to learn, to win, but most of all to sing. To choose a singer's career is no lighthearted decision, especially in the 21st century where classical music seems to be marginalized under the beat of popmusic. Yet one could also uphold another view, for there certainly was never a time where so many people visited the opera as today! Perhaps opera's function in society is smaller today than in 1900, but as earth's people have multiplied vastly there are more people listening to opera today than ever before. Opera is also no longer a European art, but a universal passion from Milan to Seoul, New York to Tokyo and Moscow to Bejing.

The background of the COMPETITION

In 1995 the Brailan municipality was thinking about organizing a significant event that would honour the memory of Hariclea Darclée. At one point Mariana Nicolesco (1948-2022) turned it into an international competition. The first Hariclea Darclée International Competition started with 120 participants. The tradition to let the finalists perform in public at the end of the competition started there, with some of them also parttaking in the complete opera performance that concludes the contest's finals. Mariana Nicolesco:

"These young ones are full of doubt on this extraordinary path they are heading for, and lots of them might get there, if only they would be singing the right repertoire. That is why we let them sing the things they feel most comfortable with. A good young voice is like a rough diamond. You polish it and all of a sudden you see this extraordinary light come out. And then there's the theatre life of course. In these weeks full of rehearsing for the final concert and the opera performance they learn to live in the theatre for twelve hours a day - and to enjoy it. This is very rare. I had this experience myself at La Scala. I will never forget these seven new productions, especially the Don Giovanni with Muti: from ten o' clock a.m. to two p.m. with only a few 10 minute breaks. We could go on and on, and then after midnight we all went over it again at dinner. That is what young singers find in Braila today. We give them 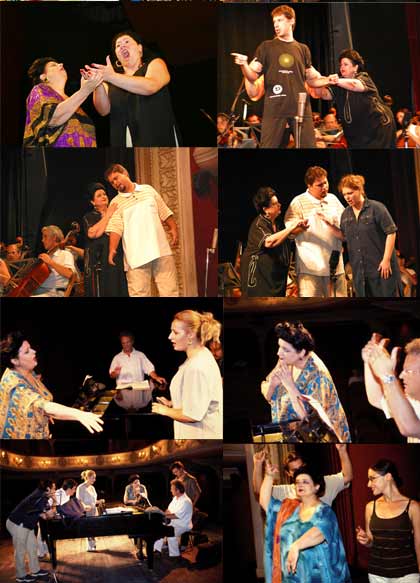 the chance to participate in real public performances, so that they can develop."

When it comes to Romania's vocal talents, Nicolesco was very optimistic:

'There are exceptional Romanian voices today, just as there have always been. Talent is one thing though, to bring it to bear fruits is another. You have a score in which everything is written, but just how to interpret this score is something you have to learn. The words, especially their meaning and subsequently their interpretation are crucial for the singing. How can you touch me if you don't know what you are saying? Young singers need to develop the style. You see, tno singer deliberately wants to use the voice wrong. They don't want to have the larinx closed, they do want to sustain etc. Now the basis of singing is breathing, the diaphragm, sustaining the line. There aren't one hundred types of piano-playing - you have one instrument and basically only one technique. That's the alphabet of singing, just like when you write. What varies is the handwriting and the different style, but all within the same basic technique. Some become great writers, others don't. A number of our laureates entered the academia of La Scala di Milano. Some now sing at the Salzburg festival, some in Rome, at the Metropolitan and at the Viennese Musikverein. That illustrates the importance of the Hariclea Darclée International Voice Competition.'

Mariana Nicoleco passed away in a private clinic in Bucharest on October 14, 2022, after a short illness. We wish those close to her strength with their loss and hope that the City of Braila will find a suitable successor to carry the torch of the Darclée Competition into a bright future.